Amir H. Jamal: The First Tanzanian Who Was Not Black to Join TANU 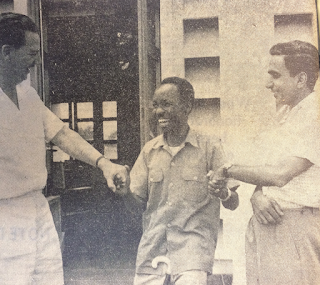 On January 17, 1963, the Minister of Home Affairs and TANU Secretary General, Oscar Kambona, presented Amir H. Jamal with a TANU card no. 487,382. Jamal was the first person not black to join TANU. The decision to allow people of all races to join TANU came after years of intense debate within the party. It was not until after Tanganyika won independence, not until the Tanganyika government begun to take a strong stand against apartheid and racial discrimination outside its own boundaries, that a decision to change membership policy was accepted. The contradiction could no longer be allowed to continue.
Amir Habib Jamal was born in northern Tanzania in 1922. He attended school in his home town of Mwanza first before going to Dar es Salaam to pursue secondary education. Jamal earned a degree in economics from the University of Calcutta in India. Jamal was interested in politics while attending university. He was present at a meeting of the Indian National Congress in which Mahatma Gandhi initiated the Quit India Movement in 1942. He returned to Tanganyika after earning his degree and worked in a family business. TANU needed funds to keep the struggle going. Jamal was one of the people who provided financial support to TANU as far back as mid-1950s.
Jamal joined politics directly in 1958 when he became a candidate for the Legislative Council. TANU had worked out a scheme to support members of various races in order to have majority support in the Council. Jamal was among the candidates of different races who received TANU support. Nyerere was with Jamal and Graham Lewis when they received news of the election results in September 1958. A photographer snapped the iconic picture of jubilant Nyerere holding Lewis and Jamal's hands. The image was published by a Tanganyika newspaper in 1958 (see image attached to this post). In the picture, Nyerere can be seen holding the hand of Lewis (wearing all white) to his right and Jamal to his left.
The government of Tanganyika faced many challenges in 1962. The newly independent country had a shortage in trained and qualified experts to serve the government. Officials scrambled to find new sources of finance for the government. Nyerere resigned early 1962 and Rashidi Kawawa became the Prime Minister as Nyerere worked to reorganize the party. The newly independent government of Tanganyika opened up doors to freedom fighters from southern Africa. Tanganyika was beginning to push an aggressive policy against colonialists and racialist governments in Southern Africa. It was under this context that party leaders sat down to discuss the policy of prohibiting members of other races from joining the party. Jamal would eventually become the face of the new TANU policy of embracing members of all racial groups.
The question of allowing people of different races to join TANU had been on the table as far back as 1954. Nyerere tried to convince his colleagues in 1954 to open up TANU membership to all races. The proposal faced fierce resistance from most members of TANU. The situation changed shortly after independence. Tanganyika leaders found themselves unable to reconcile a major contradiction in their membership policy. With TANU condemning the apartheid South Africa government and other minority governments in southern Africa, how can the party deny non-blacks an opportunity to join them? How could Tanganyika leaders go to different western countries and ask for assistance while maintain a policy of discrimination within TANU? It was around this time when Nyerere was preparing to undertake a mission to western countries to get their support for an end to colonialism and racialist governments in Africa, that it became necessary to press for a change in policy within TANU.
Nyerere decided to do this at a secret TANU executive meeting held sometime in November 25/26, 1962. A good number of TANU officials were adamantly opposed to opening up membership to all races. There was a heated debate by all accounts. Nyerere finally made a compelling case that he later referred to as the “Kennedy point.” Nyerere asked his colleagues how they expected him to face President Kennedy when they continued a policy of racialism in Tanganyika? He continued: “Kennedy called out troops in name of equal rights for all Americans. You thought he was right to do what he did. How can we look Americans in eye if we refuse to end racial discrimination in TANU? Commenting about the debate, Oscar Kambona pointed out that the meeting was “unexpectedly difficult.” A good number of the members wanted “honorary membership” of non-Africans. Kambona conceded that those opposing the policy finally relented because of the inherent contradiction in the position they were maintaining. He pointed out that Tanganyika government and TANU could not carry out a serious campaign against apartheid in South Africa and racial discrimination in Southern Rhodesia (Zimbabwe) while precluding non-Africans from the party. Nyerere won over his colleagues through persuasion, through the power of argument, not force and coercion. TANU leadership was now ready to open up doors to everyone. The final approval had to be made at the TANU Annual Conference. News of the change of policy soon leaked out. Nyerere decided to call press conferences on November 28, 1962 because of the leaks. It was at this press conference that the nation learned about the new policy.
TANU Annual Conference decided on January 17, 1963 to approve a resolution opening up party membership to all races. Amir Jamal, then Minister for Communications, Power and Works became the first non-African to become a member of TANU.
Jamal went on to serve the nation with distinction. He became the Minister of Finance from 1965 to 72, Commerce and Industries 1972-75, Minister of Finance from 1975-77 and again from 1979-1983. He served as a Minister without Portfolio 1983-84 and as the Minister of State for Cabinet Affairs from 1984-85. Jamal played an important role in the development of Tanzania’s socialist economy. He was the longest serving Minister of Finance in Tanzania’s history. Jamal later moved to Canada where he lived until his passing in 1995.
©Azaria Mbughuni
August 18, 2018

Posted by Azaria Mbughuni at 2:15 PM