Mzee Morris Nyunyusa: A Legend in His Own Right

For many years those tuning in to listen to news on Tanzania Broadcast Corporation heard music coming from the drums of Morris Nyunyusa or Mzee Morris as he was known by many. Shortly before news was broadcasted, sounds of drums would be followed by a beeping sound exactly six seconds before the hour, six beeps each second leading up to the hour when news of the day was broadcasted. The drum beats and the beeps became a daily ritual for the hundreds of thousands of people who would tune in each day to listen to news. The legendary drummer behind the music was none other than Morris Nyunyusa, one of the most celebrated drummers ever to come out of East Africa.
Playing seven drums could be challenging for many people with good vision. Mzee Morris was blind and he could play up to seventeen drums by the time of his death. Like many artists in Tanzania, Mzee Morris remains a distant memory for the many women and men who came of age in the 1980s. For the new generations, the name Mzee Morris, is unrecognizable, lost to the winds of time. Memory of this legendary musician, a national hero, appears to be fading away each passing day. Yet to sum up the life of this accomplished musician to the fading winds of time, abject poverty he experienced at the end of his life, or his blindness, would be to miss an important point: he was able to rise above challenges thrown his way, make significant contributions to the nation, and ultimately, guarantee his place in history.
Morris Nyunyusa was a Ngoni born in Tunduru, southern Tanzania circa 1918. He died in 1999. Morris contracted smallpox when he was a child. He lost his sight at the age of three due to complications caused by smallpox. The young boy developed love for music at a young age. He learned to play the marimba and then eventually switched to playing drums. Morris’s mother was one of the most important figures who helped mold and shape the young boy's interest in music. His mother led unyago ceremonies; the little Morris was allowed in to the secretive unyago dances because he was blind. Ever close to his teacher and mentor, Mohamed Kalesa, Morris would later learn to play three drums at first, before eventually graduating to seventeen drums. His wife moved around with him and helped arrange the drums; this task was eventually be shared with his son.
Morris slowly gained fame as a drummer in the 1950s. Tanzania, then Tanganyika, was under British colonial rule. Sometime towards the end of 1950s, he increased the number of drums from three to seven, and eventually, increased the number to seventeen drums. Morris was brought to the attention of Tanganyika Broadcasting Corporation in 1959; his skills on the drums were unparalleled. Morris was recorded for the first time in 1959 and broadcasted on the radio. He slowly gained fame around the territory as his music could be heard on the radio. Invitations for him to play in different events would increase in time.
The government of Tanzania moved Morris Nyunyusa from Tunduru to Dar es Salaam in 1969. He went on to represent Tanzania in cultural festivals in Tokyo, Japan in 1970. It was reported that Morris Nyunyusa had the Emperor Hirohito of Japan spellbound by the rhythm of his drums. Nyunyusa was in Japan together with the Tanzania Dance Company that included snake and stilt dancers, and the Police Band. Recognizing his unique talent, the government decided to hire Nyunyusa to work for the Ministry of Culture in 1970. Mzee Morris travelled to different parts of Africa, Europe, and Asian, often as part of Tanzania Dance Company. He became one of Tanzania’s most recognized cultural ambassadors. Mzee Morris travelled to Nairobi, Kenya to entertain at the opening of the World Council of Churches (WCC) 5th Assembly November of 1975. This was one tour among the many others done in Africa.
The Tanzania government recognized Mzee Morris with a special stamp issued in 1981. The stamp immortalized Mzee Morris as one of the most accomplished cultural ambassadors in the country. The stamp featured him playing drums. Few Tanzanians have had the honor of being featured on the national post office stamps. This was a celebration of his achievements, and at the same time, part of a campaign to bring awareness to disabled persons.
By some accounts, Mzee Morris was abandoned and left to live a destitute life towards the end of his life. He suffered the fate that is not uncommon for many other artists who have left their mark on the nation. Yet focusing on the fact that the nation appears to have abandoned him at his time of greatest need, or focusing on his blindness as a handicap, would be doing injustice to his life and accomplishments. Mzee Morris had a long career that span well over five decades, from at least 1930s to 1990s. He entertained the nation through his music and served as a government employee for twenty-two years until he retired in 1992.
For the few who were able to see Mzee Morris play drums, his performances were thrilling and unforgettable. He was a master drummer able to make the drums talk, his hands moved with lighting speed; he knew exactly where his seventeen drums were, never missing a beat. Mzee Morris was without a doubt a musical genius. His life and accomplishments tells us something about the human spirit, determination to achieve excellence using the very cards we have been handed and not what we have been denied. He took his art to another level, elevated his country with every drum beat. His place in the annals of history is guaranteed. 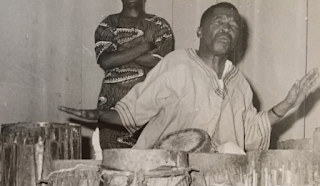 Posted by Azaria Mbughuni at 8:06 AM No comments: