Here is a link to my article on Che Guevara's visit to Tanzania:

Second part of article on Che Guevara's visit to Tanzania:

The Legacy of Julius K. Nyerere 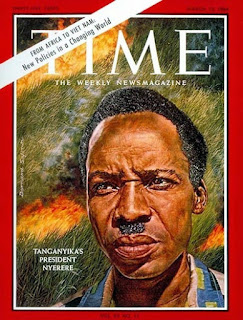 Nyerere became a leader of a country that only had 2 engineers and 12 doctors employed by the government.

"To measure a country's wealth by its gross national product is to measure things, not satisfactions"
~Julius Kambarage Nyerere ~13 April 1922 to 14 October 1999.

If You don’t Have Integrity, You Have Nothing! : Lessons from Mwalimu Nyerere 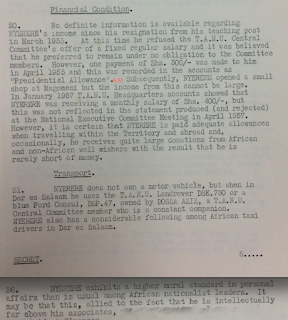 We must demand more from our leaders. How many African leaders today can stand shoulder to shoulder with the likes of Nyerere, Mandela, and pass the integrity litmus test? Nyerere gave up a salary of 750 £ per year in March 1955 and refused a regular salary from TANU for a while.  Nyerere opened a small shop in Magomeni in order to supplement his income. As the leader of the largest independence party, Nyerere opted to depend on a party vehicle, friends, and a bevy of African tax drivers who were his supporters for transportation; he was in position to purchase  a car, but decided not to get one.
Nyerere retired in 1985 and lived in a modest house in Msasani. He was not motivated by money, wealth, or material possession. As the report states: “Nyerere exhibits a higher moral standards in personal affairs than is usual among African nationalist leaders,” it adds, “It may be that this, allied to the fact that he is intellectually far above his associates…” No wonder colonial officials were forced to admit the fact that he was "intellectually far above his associates" and that he "exhibits a higher moral standards." He was incorruptible! The British colonial officials dealt with a multitude of Tanganyika leaders in the 1950s; they appear to view Nyerere as being incorruptible.
Even in the heydays of TAA/TANU in the 1950s, there were important leaders whose integrity was brought into question. Questions were asked about leaders such as Thomas Plantan, Steven Mhando, and Dossa Aziz; the last two were questioned when TANU’s accounting books did not add up.
There are many lessons we can draw from Mwalimu Nyerere.  One important lesson is that of integrity. A leader who is not corrupt before holding the most important office in government is unlikely to become corrupt after holding the high office.  A candidate who is corrupt before elections is likely to continue with grand scale corruption after being elected into office.  It is high time that Tanzanians speak with one voice in the 2015 elections.  Electing and supporting a corrupt leader is an indication that we are corrupt as a society; for, only a corrupt society can elect and support a corrupt candidate. There are many people who hold office; but not everyone has qualities that makes them a leader.  About five months shy of the 2015 elections in Tanzania: who will you vote into office? As we look to the future, it is important that to take a moment to reflect on the past: those we elect into office must pass the integrity litmus test. After all, if you don't have integrity, you have nothing!

Posted by Azaria Mbughuni at 6:55 PM No comments:

Morality, integrity, and ethics are values that have to be acquired at an early age. These values are difficult to acquire in adulthood. As the saying goes: “you can not teach an old dog new tricks,” and so does the fact remain that you cannot expect a leader to become ethical or acquire integrity while in office.
We have become accustomed to corruption and complaining about this evil. Complaining, making loud, useless noises has become the norm in our beloved country, Tanzania. We as a society must think carefully about the past and the present when we sit down to plan the future of this young nation.
At the present time, the nation continues to face challenges that should force us to think about who we are as a people. Elected leaders are a reflection of those who elect them. A society that elects corrupt leaders cannot turn around and blame the leaders they elected for corruption; after all, the electorate are part and parcel of the process that allows such leaders to be elected. Only a corrupt society can elect corrupt leader. We must ponder this reality before we point fingers. If you have bribed a police officer or a government official, then you are part of the problem and not the solution. Look yourself in the mirror first before you point your finger at the politicians you elected. We must change as a society, and only then, can we expect our leaders to change. But change must start somewhere. How do we move forward?
We are at a critical juncture in Tanzania. We have a young democracy. This young democracy will not survive if grand corruption on the scale we have seen persists. The time has come to redefine what it means to be a Tanzanian. We have a choice. We hold the future at the palm of our hands. Let us face this reality: corruption is part of every day life. Corruptions pervades all aspects of the society from the lowest echelons of the society to the highest. Expecting bribes, giving bribes, praising acquisition of wealth by any means, has become acceptable. We laugh at incorruptible leaders living simple lives and look up to corrupt leaders who drive luxury cars and live in expensive houses. The very moral fiber of our society has been eroded to the core. We will never eradicate corruption and build a society based on equality, justice, and liberty for all until we face this simple truth: we must change as a society. We have a choice. A choice to change, and in the process, change the direction of the nation and the leaders we put into office.
We must change. As a society we have accepted a culture that hinders transparency and does not hold those in public service accountable for their actions. We must work to implement government transparency and accountability. We can never expect to change as a society if we do not create institutions that are transparent; we can not improve the lives of majority of Tanzanians if we do not create a system that holds people accountable for their actions. The culture of secrecy must be replaced with one that is open and transparent.
This is a new era. The millennials in Tanzania are ready for change. It is with them that the future of the nation lies. Majority of Tanzanians eligible for voting are under 30 years of age. The young people must speak with one voice. The time has come for Tanzanians to act.
Let your voice be heard: integrity, ethics, morals, transparency, and accountability! These are the five issues that should define the next candidate you vote into office. 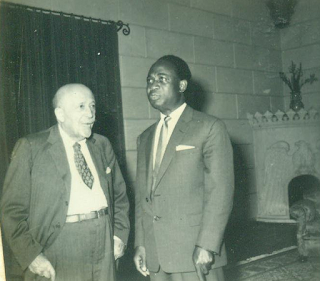 Did Malcolm X Have Passion for Tanzania? 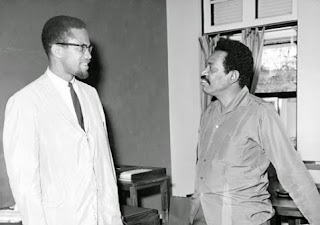 This article was first published by Business Times (Tanzania), September 8, 2014