Posted by Azaria Mbughuni at 8:23 AM No comments:

The Plundering of Tanzania's Diamonds

The Plundering of Tanzania's Diamonds
The looting and plundering of African mineral resources has been taking place for centuries. In light of the recent report from Tanzania indicating widespread looting in the Diamond, Tanzanite, and other important mineral sectors, it is important to remember that this is not new, and with this knowledge, we must think carefully about how to make necessary changes in order to insure people of Tanzania benefit from what is theirs.
Tanzania, then Tanganyika, became the "Wild Wild West" of mineral search in the 1920s. Tanganyika exported 8,898 ounces of gold, 411.5 carats of diamonds, 1,010 ounces of silver, and 10 tons of tin ore in 1926. These numbers were not very impressive, but the size of the deposits and future prospects was impressive and it drew the attention of big foreign multicorporations. The British, Americans, Canadians, South Africans, converged to Tanganyika in search of their piece of the pie, riches. The looting of Tanganyika reveals the ways in which imperialism and capitalism penetrated Africa. Although Tanganyika was a British colony, the territory was fair game for all major capitalist venture from the West; foreign companies from Europe, America, Asia, and even South Africa, competed to inject capital and exploit newly discovered minerals. Africans were set up to gain little, if anything, from these exploits. Nothing illustrates this point more than the competition for control of Diamond mines in the northern Tanganyika in the 1940s. Fierce international competition for Tanganyika's diamond led to the intervention of Western governments in support of their nationals. A Canadian named John Williamson, would eventually win the magnificent cake that was set in motion with the Berlin Conference of 1884-1885: one of the world's richest diamond mines in Mwanza, Tanganyika. You see Canada's exploitation of Tanzania, is afterall, not something that started recently with the revelations about ACACIA in 2017; it has long and deep roots.
Large alluvial diamonds and diamondiferous deposists were discovered near Mwanza in 1925. The discovery was compared to the famous diamond mines of Kimberly, South Africa at the time. It should be remembered that Kimberly diamond mines was one of the largest in the world and it continues to yield diamonds to this day. The potential for making unimaginable profits from diamond exploits in north western Tanganyika was enormous. The initial discovery of diamondiferous deposists were found in a 250 acre farm that was owned by Germans before World War I. The German colonial government granted a concession to a South African named Van Koon. Van Koon established legal claim to the holdings after the British government took over Mandate of the territory in 1919. The concession was sold to a Johannesburg syndicate in 1925.
In the mean time, a Canadian Geologist, John Williamson, found his way to South Africa and worked for a subsidiary of De Beers in Northern Rhodesia (Zambia). He purchased a diamond mine in the mid-1930s in Northern Rhodesia; the venture failed. Williamson turned his attention to Mwadui area in north west Tanganyika in 1940. He would work to develop one of the most profitable diamond mines in the world. Williamson faced fierce competition from South African and American companies for the rights to mine diamonds in Mwanza. The US government intervened on behalf of a US company that wanted to exploit the diamonds in Mwanza. The State Department kept a close watch on mining potential in Tanganyika from the 1920s. The competition for Tanganyika's diamonds in the 1940s tells us a lot about what has taken place in Tanzania just in the past 20 years alone. Western companies work with their governments and do everything in their power to ensure that they have access to African minerals.
By the end of 1940s, John Williamson's diamond company was mining over 8 million dollars of diamond annually; this is a sum that was close to the entire budget of the British colonial government for all of Tanganyika. In other words, one person earned in a year almost what the colonial government was spending for running the entire territory. Williamson gave the Queen of England one of the finest pink diamonds ever discovered in 1953 as a gift. The diamond was found in 1947 in his Mwadui mine. John Williamson was one of the richest people in the world when he died in 1958. The region that Williamson mined diamonds did not benefit much considering what was being exported from the region; neither did Tanganyika as a territory gain much from the diamond exploits.
The development of Tanganyikans was then, and remains to this day, the last thing in the minds of those intent on acquiring personal riches, these are individuals inside and outside the country. Such is the nature of the tentacles of capitalism. A country with a wealth of mineral resources is left with little to nothing while multicorporations with the backing of their governments use every trick possible to ensure the system of exploitation of Africa's resources persists. This is what Tanzania and Africa in general is facing in the beginning of the 21st century, just as it did in the beginning of the 20th century. This pattern will continue into the 22nd century if Africans do not change.
The recent reports of Diamond, Tanzanite and other minerals being looted from Tanzania, should not come as a surprise. A bag of diamond stopped at the airport August 2017 from Mwadui diamond mine was officially recorded to be worth $14.7 million; official investigation revealed that it was worth $29.5 million. The company underreported the value of diamonds it was exporting. How long have they been doing this? This kind of looting has been taking place for at least 100 years. What is important at this juncture is what we do next. We cannot continue to do the same thing and expect different results. 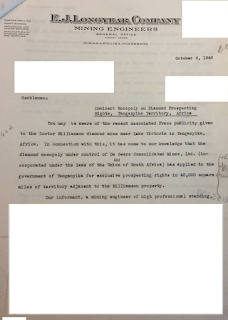 Posted by Azaria Mbughuni at 9:17 AM No comments: