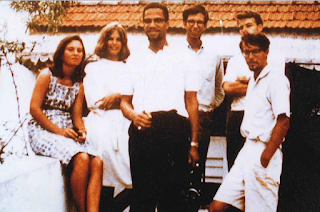 Posted by Azaria Mbughuni at 8:35 AM No comments:

Posted by Azaria Mbughuni at 8:32 AM No comments:

A light was turned on sometime in April 13, 1922. Here are a few selected quotes by Mwalimu Julius K. Nyerere. That light continues to shine!

"The man whose contributions merits at footnote in the history of United Africa will deserve more of the future, than he whose obstinacy, fear or pride, prevents or delays the day when that history can be written."
“We in Tanganyika believe that only a wicked man can make color the criterion for human rights. Here we intend to build a country in which the color of a person’s skin or the texture of his hair will be as irrelevant to his rights and his duties as a citizen as it is irrelevant to his value in the eyes of God.” (1960)
“It is this freedom to search which is the starting point of all progress of all mistakes which man has made and will make for ever. Historical changes such as the Renaissance, Reformation, Capitalism, Socialism or Nationalism were corrections of history, which in turn, were corrected again. (1961)
“In my opinion, what we have achieved-although it is important-is still very little. We cannot, the African, the Black people on this planet, will not play their real role, will not contribute to the march of human history until we are liberated, which we are not. I’m not liberated. I can’t be liberated simply because I am the head of state of an independent African state. This is not possible. I can only be liberated when the people of Africa, when African people, are liberated. And they are not liberated now. We have got to work for this liberation of the person. This means the ending of exploitation, the ending of all kinds of inequalities. We’ve got to work for this.” (1973)
“When a Bokassa behaves as a Bokassa I feel bad. When Amin behaves as Amin I feel bad. There is a sense in which I am also like those blessed racists who point to Bokassa or Amin and say. “Ah! Look at Black Africa.” But they don’t point to Hitler and say, “This is a white man.” Or to Salazar or Franco and say, “This is a white man.” They simply say. “This is Hitler. This is Franco. This is Salazar.” But with Africa they generalize. They say, “See what is happening in Africa?” I could just as easily point to Portugal and say, “See what is happening in Europe?” So you could say what does Bokassa represent? Bokassa is a tyrant. Amin is a tyrant. And the world has had tyrants. They never started in Africa. Bokassa’s hero was Napoleon. Amin quoted Hitler. So what is peculiar about the tyrant in Africa?... My real problem, what I’ve been complaining about, is the tendency among Africans to feel shy in front of these tyrants, to not denounce them as tyrants. An African feels ashamed when he sees a tyrant instead of being angry.” (1979
Posted by Azaria Mbughuni at 8:30 AM No comments:

How Tanganyika and Zanzibar Became Tanzania

How Tanganyika and Zanzibar Became Tanzania 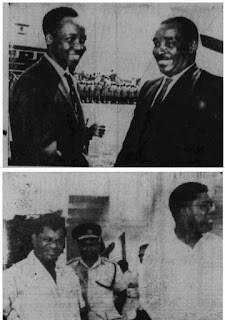 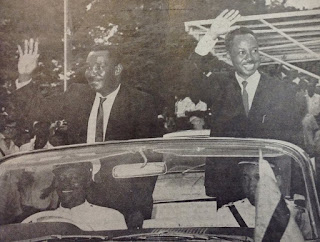 Posted by Azaria Mbughuni at 8:27 AM No comments: 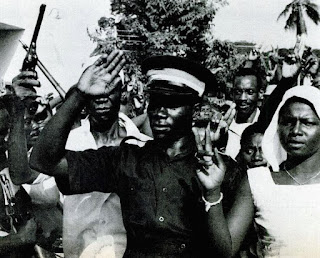 On the morning of Saturday, January 11, 1964, Mr. Bott, the Head of the Zanzibar Special Branch, received a call from Abeid Amani Karume to meet him. Mr. Bott went to the ASP Headquarters immediately. He was conducted into a room where Karume, Jumbe and Saleh Sadalla were sitting. Karume told Bott that he "heard rumors from a woman whom they did not know... there might be trouble in Zanzibar that day." ASP was spilling out the beans to the government before the Revolution. Why?
The story of the Zanzibar Revolution is complicated, to say the least. Secrecy remains the order of the day. Countless books and articles have posited different ideas about exactly what took place in January 12, 1964. The ever elusive facts continue to evade the pens and papers of innumerable authors.
The Zanzibar Prime Minister, Muhammad Shamte, the Sultan, and other government officials were informed in advance of the troubles to come. Shamte ordered the police patrols to be increased and to remain vigilant against a planned attack.
Large number of additional patrols were mounted, all Special Branch officers were sent out, and road blocks were set up during the day. More police were placed at the Sultan's palace and other important buildings. Ali Muhsin was informed about the plot and four police were sent to guard his home. News of the planned Revolution was no secret hours before it was supposed to be launched. A low level member of the ASP told an informer that there were plans to take over the police armoury. One of the most important operations of the Revolution-capturing weapons from the armoury-was known to the government officials in advance. Shamte was aware that there were plans to attack Arabs at night. The government had advance warning of the Revolution. Attempts by the Zanzibar intelligence apparatus to collect intelligence of the plot between the morning of January 11 and just before midnight was a total failure, or so it appears. The result was that the government underestimated the dangers and failed to take appropriate measures to prevent it. This was a colossal failure with dire consequences.
The government war against the UMMA party backfired in the worst ways. A series of events in the beginning of April, 1964 set the ball rolling for Babu and members of the UMMA party. On April 9, 1964, Abdulrahman Babu's daughter was run over by a car and killed; it was a tragic accident. The police searched for Babu everywhere, but could not find him. Babu and Hanga had escaped at night to Dar es Salaam. The government of Shamte raided UMMA offices and took out documents. The police also raided Babu's home and found a small handgun. Among the documents they found was a list with almost 1,000 members. The list included a large number of government employees. They also found Babu's diary written in Peking, China. It was a treasure trove of intelligence for the ZNP/ZPPP government and the colonial officials. Babu had escaped just before the police showed up at his house. He was alerted about the police search and knew of the troubles to come. Men trained in Cuba were returning to Zanzibar in small numbers at a time. Babu and the UMMA party were up to something.
Shamte and his government implemented a policy of "Zanzibarisation" of the police force shortly after coming to power. The Zanzibar government made the decision in November 1963 to remove all non-Zanzibari from the police force. The British colonial government had not recruited from mainland since 1959. Yet all the Inspectors and Senior NCOs were mainlander (from East and Southern Africa) with four to thirty five years experience in the police force. Of the 270 men in the force, only 90 were from Tanganyika, the rest were from South Africa, Malawi, Uganda, and elsewhere. Among the highly experienced police working for the Zanzibar government was the Assistant Superintendent of Police, Eddington Kissasi from Tanganyika. Ali Muhsin announced in numerous public events that "neither he nor the Government fully relied on the loyalty of the mainland members of the police force or indeed of any non-Zanzibaris members." This was a dangerous statement. Meanwhile plans were being made to bring in "advisors" from Egypt. It is obvious that Shamte, Muhsin, and the govenrment of Zanzibar had made a decision to embark on a policy of discrimination against mainlanders. It was a mistake they would pay dearly.
The ASP organized a large party on the evening of January 11, 1964 at their headquarters. Large number of ASP members and supporters attended the party. Some of the men were told to go to Seamens Union Club at Miembeni after the party was over. There they were met and addressed by Karume, Jumbe and Babu. Babu who was supposedly in Dar es Salaam, had slipped secretly to Zanzibar at night and then left for Dar es Salaam in the wee hours of the morning. At the meeting, the three leaders told the men not to be afraid to die. Karume did not hang around long; he got on a boat early morning and left for Dar es Salaam. Karume would not return to Zanzibar until much later on the evening of January 12th with about 12 armed men on a boat owned and operated by an Israeli named Mishah Feinsilber. Oscar Kambona was there to see them off.
John Okello was a...
© Azaria Mbughuni
Posted by Azaria Mbughuni at 8:24 AM No comments: