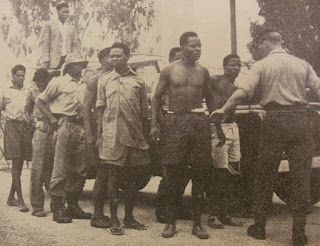 The 1964 Tanganyika Army Mutiny, the "Day of Shame": 51 Years Ago on this Day
At 2:45 pm on January 24, 1964, Oscar Kambona and Paul Bomani, delivered a letter to the Acting British High Commissioner, Frank Steven Miles. The letter read:
“Your Excellency, I am directed by President of the Republic of Tanganyika to approach the British Government with a request for military assistance..” Rashid Kawawa, the Vice President of Tanganyika, signed the letter. 45 British Commandos flew in helicopters and stormed different targets, including the Colito barracks and subdued soldiers who mutinied on January 25. The British operation marked the end of a sad chapter in Tanganyika’s history; Nyerere would later describe the day of the mutiny as a day of “national shame.”
The army mutiny started early morning of January 20th, 1964. It started at 1:30 am when the soldiers sounded the alarm at the Colito Barracks (now Lugalo) outside Dar es Salaam and arrested officers. The soldiers demanded higher wages and promotion for African soldiers. Job Lusinde, Bhoke Munanka, Oscar Kambona, and later Paul Bomani, would keep the lines of communication between the government and the mutineers open. Kambona became the key government negotiator. Many high government leaders went into hiding as news of the mutiny spread.
The Director of Intelligence, Emilo Charles Mzena, did the most dangerous work behind scenes during the mutiny. According to one report, Mzena received news of the mutiny as soon as it happened and rushed to the State House. The soldiers made to the State House shortly after Mzena arrived; they were distracted at the gate while Mzena whisked Nyerere out. Nyerere remained in hiding for several days somewhere in Mji Mwema according to some sources. The retired Colonel Kashmiri claimed recently that Nyerere stayed at Judge Abdulla Mustapha’s home.
The mutiny did not just take place overnight. It was carefully planned over a period of several months. The confusion that came in the aftermath of the Zanzibar revolution of January 12, 1964, appears to have convinced the mutineers that the time was right to launch the mutiny; however, there is no evidence of a direct link between the two. In the course of 1963, Oscar Kambona and later Job Lusinde disbanded the Special Branch; an apparatus responsible for gathering intelligence and warning the government of any potential dangers. The British Colonial officials previously ran the agency. Tanganyika officials were suspicious of the agency after independence, and for good reasons. Kambona went on to build a new intelligence organization made up mostly of members of TANU Youth League. He began his work in 1963 when he became the Minister of Defence. The new organization did not yet have the ability to collect, analyze, and take appropriate measures by the time of the mutiny. To make matters worse, Kambona met with some of the soldiers in the end of 1963 and promised them changes. Some of the soldiers expressed dissatisfaction at the slow pace of the Africanization program. Kambona sought to make the changes; however, he encountered resistance from the British head of the military, Brigadier Patrick Sholto Douglas.
More to come...
© Azaria Mbughuni
Posted by Azaria Mbughuni at 3:15 PM